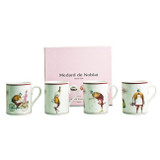 Médard de Noblat is located at Sauviat sur Vige near Limoges and has preserved a tradition and an expertise in porcelain.The history of Médard de Noblat finds it roots under the name Giraud, one of the oldest factories of Limoges in 1836. When sold in 1989, it became Médard de Noblat. By exporting massively to the United States, Japan and Europe, the reputation of Limoges porcelain has grown largely. In the past Médard de Noblat has served a variety of famous people and places, such as the Shah of Iran, Pope John XXIII, General de Gaulle, and the George V hotel in Paris, Nikko, Michel Guerard in Eugénie les bains and Awashima in Japan.