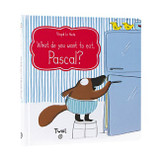 Pascal wakes up really, really, really hungry. There is nothing left to eat in his refrigerator and he can't figure out what he wants! Pascal visits his friends to find something yummy to put in his tummy. But, yuck! Cardigan, Fancy, Zelda, and Ringo eat really strange stuff! Pascal is still very hungry and he still doesn't know what he wants! Finally, Pascal figures out what he's in the mood for. . . . What could it be? Join Pascal, Cardigan, Fancy, Zelda, and Ringo in this first book in a series as they explore life's little mysteries—by means of opening the multiple flaps throughout—with imagination and humor.

Magali Le Huche studied decorative arts in Strasbourg, France, before she began illustrating children’s books in Claude Lapointe’s illustration program. Since then she has published more than 25 books and her work can be seen regularly in children’s magazines. She lives in Paris, France.